The 1911 Liverpool general transport strike, also known as the great transport workers' strike, involved dockers, railway workers and sailors, as well people from other trades. It paralysed Liverpool commerce for most of the summer of 1911. It also transformed trade unionism on Merseyside. For the first time, general trade unions were able to establish themselves on a permanent footing and become genuine mass organisations of the working class. Strike action began on 14 June when the National Sailors' and Firemen's Union announced a nationwide merchant seamen's strike. Solidarity action in support of the seamen led to other sections of workers coming out on strike. A strike committee – chaired by syndicalist Tom Mann – was formed to represent all the workers in dispute. Many meetings were held on St. George's Plateau, next to St. George’s Hall on Lime Street, including the rally on 13 August where police baton charged a crowd of 85,000 people, who had gathered to hear Tom Mann speak. This became known as "Bloody Sunday". In the police charges and subsequent unrest that carried on through the following night, over 350 people were injured. 3,500 British troops were stationed in the city by this time. Two days later, soldiers of the 18th Hussars opened fire on a crowd on Vauxhall Road, injuring fifteen, two fatally: John Sutcliffe, a 19-year-old Catholic carter, was shot twice in the head, and Michael Prendergast, a 30-year-old Catholic docker, was shot twice in the chest. An inquest into their deaths later brought in a verdict of 'justifiable homicide'. Home Secretary Winston Churchill sent in troops and positioned the cruiser HMS Antrim in the Mersey. 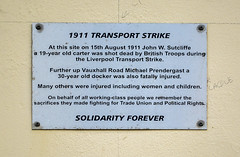