Bill Richmond (August 5, 1763 – December 28, 1829) was a British boxer, born into slavery in Richmondtown, New York. Although born in Colonial America, he lived for the majority of his life in England, where all his boxing contests took place. Richmond went to England in 1777, where he had his education paid for. He then apprenticed as a cabinetmaker in York. In the early 1790s, Richmond married a local English woman, whose name was probably Mary Dunwick, in a marriage recorded in Wakefield on June 29, 1791. Richmond and his wife had several children. According to boxing writer Pierce Egan, the well-dressed, literate and self-confident Richmond came on the receiving end of racist attitudes in Yorkshire. Egan described several brawls involving Richmond because of insults. One brawl occurred after someone labeled Richmond a "black devil" for being with a white woman—probably a reference to Richmond's wife. According to Egan, Richmond fought and won five boxing matches in Yorkshire, defeating George "Dockey" Moore, two unnamed soldiers, one unnamed blacksmith and Frank Myers. By 1795, Richmond and his family had moved to London. He became an employee and household member of Thomas Pitt, 2nd Baron Camelford, a British peer and naval officer. A boxing enthusiast, Pitt may have received boxing and gymnastic instruction from Richmond. Pitt and Richmond visited several prize fights together. 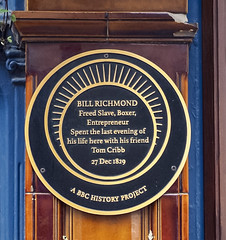 36 Panton Street, London, United Kingdom where they was