Harry Houdini (/huːˈdiːni/, born Erik Weisz; March 24, 1874 – October 31, 1926) was a Hungarian-American escape artist, illusionist, and stunt performer, noted for his escape acts. He first attracted notice in vaudeville in the United States and then as "Harry 'Handcuff' Houdini" on a tour of Europe, where he challenged police forces to keep him locked up. Soon he extended his repertoire to include chains, ropes slung from skyscrapers, straitjackets under water, and having to escape from and hold his breath inside a sealed milk can with water in it. In 1904, thousands watched as he tried to escape from special handcuffs commissioned by London's Daily Mirror, keeping them in suspense for an hour. Another stunt saw him buried alive and only just able to claw himself to the surface, emerging in a state of near-breakdown. While many suspected that these escapes were faked, Houdini presented himself as the scourge of fake spiritualists. As President of the Society of American Magicians, he was keen to uphold professional standards and expose fraudulent artists. He was also quick to sue anyone who imitated his escape stunts. Houdini made several movies but quit acting when it failed to bring in money. He was also a keen aviator and aimed to become the first man to fly a powered aircraft in Australia. 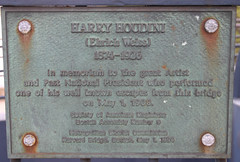 Houdini 1874-1926 The magician lived here from 1904 to 1926, collecting illusions, theatrical memorabilia, and books on psychic phenomena and magic. Famous for daring escapes, no restraints-ropes, chains, straitjackets, bank vaults, or jail cells-could hold him.

Harry Houdini (Ehrich Weiss) 1874-1926 In memoriam to the great Artist and Past National President who performed one of his well known escapes from this bridge on May 1, 1908

State Fair of Texas. Founded in 1886, the State Fair of Texas now ranks as the most largely attended State Fair in the U.S. It was begun as a private, nonprofit corporation for civic purposes by Capt. W. H. Gaston and other pioneer business and civic leaders of Dallas. Since 1904 the fair grounds have been owned by the city, which maintains them as a public park except during the annual two-week fair. The fair suspended operations for two years in order to permit the Central Exposition of the Texas Centennial Celebration to be held here in 1936. In 1937 the Pan American Exposition used the grounds. Over the years great names have appeared here, including wild west showman Buffalo Bill, Harry Houdini the magician, silver-tongued orator William Jennings Bryan, and Comanche war chief Quanah Parker. Federal, state, and city governments have erected a series of permanent buildings on the fair grounds, including the Hall of State, five other museums, music hall, livestock coliseum, and "Cotton Bowl." Originally 80 acres in size, the grounds have been successively enlarged to include the present 250 acres. Over 100,000,000 persons have entered its gates during annual expositions. #6888

St George's Hall. Bradford's first public building was designed by celebrated architects Henry Francis Lockwood and William Mawson, and financed by public subscription. It has hosted, amongst others, Charles Dickens, Winston Churchill and Harry Houdini, and is one of the oldest concert halls still in use in Europe. Erected 1853