Tjalie Robinson is the main alias of the Indo (Eurasian) intellectual and writer Jan Boon (born Nijmegen, 10 January 1911; died The Hague, 22 April 1974) also known as Vincent Mahieu. His father Cornelis Boon, a Royal Netherlands East Indies Army (KNIL) sergeant, was Dutch and his Indo-European mother Fela Robinson was part Scottish and Javanese. He is considered to be the author of unique Indo literature. Tjalie Robinson became the most influential post war Indo activist of his generation and the most important promoter of Indo culture anywhere. In his essay "Sweet Java, about Tjalie Robinson." Rudy Kousbroek, one of the Netherlands foremost essayists, simply called him "one of the greatest Dutch writers". His aim as cultural guardian was to preserve Indo culture for the future or as he put it himself: "To create living monuments for an immortal past.". In his most vivid description of the Eurasian nature of his Indo identity Tjalie Robinsion wrote: "I did not care that people wanted to call me ‘neither fish nor fowl,’ and wanted to label me (an Indo), either Indonesian or Dutch. For them I just had to choose between the two, right? Nevertheless, I stubbornly named the turtle as ‘neither fish nor fowl,’ and praised this animal as a unique, land-and-sea-lover who lives to very old ages, whose meat has an excellent taste, and who cuts through oceans from continent to continent. I said, "Just as I do not find the turtle inferior, although he is neither fish nor fowl, I do not think the Indo inferior." Tjalie Robinson's book 'Tjies' was awarded a literary prize by the municipality of Amsterdam in 1958. Robinson is the best read Dutch author in Indonesia. 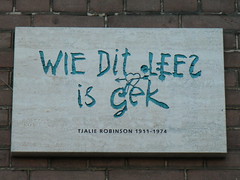 English translation: Whoever reads this is crazy. Tjalie Robinson 1911-1974