Elizabeth "Lee" Miller, Lady Penrose (April 23, 1907 – July 21, 1977), was an American photographer and photojournalist. She was a fashion model in New York City in the 1920s before going to Paris, where she became a fashion and fine art photographer. During the Second World War, she was a war correspondent for Vogue, covering events such as the London Blitz, the liberation of Paris, and the concentration camps at Buchenwald and Dachau. 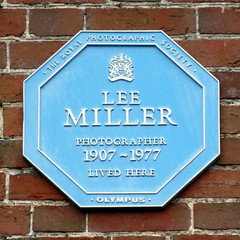