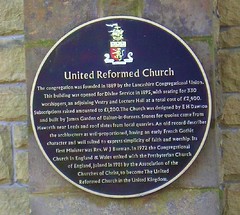 United Reformed Church The congregation was founded in 1889 by the Lancashire Congregational Union. This building was opened for Divine Service in 1895, with seating for 330 worshippers, an adjoining vestry and Lecture Hall at a total cost of £2400. Subscriptions raised amounted to £1,200. The Church was designed by E. H. Dawson and built by James Garden of Dalton-in-Furness. Stones for quoins came from Haworth near Leeds and roof slates from local quarries. An old record describes the architecture as well-proportioned, having an early French Gothic character and well suited to express simplicity of faith and worship. Its first minister was Rev. W. J. Burman. In 1972 the Congregational Church in England & Wales united with the Presbyterian Church of England, joined in 1981 by the Association of the Churches of Christ, to become the The United Reformed Church in the United Kingdom.