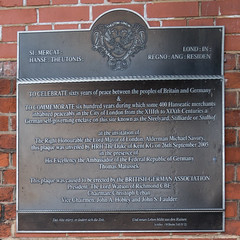 To celebrate sixty years of peace between the peoples of Britain and Germany To commemorate six hundred year during which some 400 Hanseatic merchants inhabited peaceably in the City of London from the XIIIth Centuries a German self-governing enclave on this site known as the Steelyard, Stilliarde or Stalhof at the invitation of the Right Honourable the Lord Mayor of London, Alderman Michael Savory, the plaque was unveiled by HRH The Duke of Kent KG on 26th September 2005 in the presence of His Excellency the Ambassador of the Federal Republic of Germany Thomas Matussek

Hanseatic Walk, London, United Kingdom where they was