William Lilly (11 May [O.S. 1 May] 1602 – 9 June 1681) was a seventeenth century English astrologer. He is described as having been a genius at something "that modern mainstream opinion has since decided cannot be done at all" having developed his stature as the most important astrologer in England through his social and political connections as well as going on to have an indelible impact on the future course of Western astrological tradition. Born the son of a yeoman farmer in Leicestershire, Lilly travelled to London as a youth to take up a servant's position. Seven years later he secured his fortune by marrying his former master's widow, allowing him the leisure to study astrology. In 1644, during the English Civil War, he published the first of many popular astrological texts, and in 1647 he published Christian Astrology, a huge compendium of astrological technique. This was the first of its kind to be printed in the English language rather than Latin, and is said to have tutored "a nation in crisis in the language of the stars". By 1659, Lilly's fame was widely acknowledged and his annual almanac was achieving sales of around 30,000 copies a year. Lilly's autobiography, published towards the end of his life in 1681, at the request of his patron Elias Ashmole, gives candid accounts of the political events of his era, and biographical details of contemporaries that are unavailable elsewhere. It was described, in the late 18th century, as "one of the most entertaining narratives in our language", in particular for the historical portrayal it leaves of men like John Dee, Simon Forman, John Booker, Edward Kelley, including a whimsical first meeting of John Napier and Henry Briggs, respective co-inventors of the logarithm and Briggsian logarithms, and for its curious tales about the effects of crystals and the appearance of Queen Mab. In it, Lilly describes the friendly support of Oliver Cromwell during a period in which he faced prosecution for issuing political astrological predictions. He also writes about the 1666 Great Fire of London, and how he was brought before the committee investigating the cause of the fire, being suspected of involvement because of his publication of images, 15 years earlier, which depicted a city in flames surrounded by coffins. Lilly was a controversial character who was both aided and abetted by powerful friends and enemies. He attracted the attention of many members of Parliament, through the support of Sir Bulstrode Whitelocke, Lord Keeper of the Great Seal of England, (to whom he dedicated his Christian Astrology), but also accused Members of Parliament of engineering charges against him in 1651. To his supporters he was an "English Merlin"; to his detractors he was a "juggling wizard and imposter". 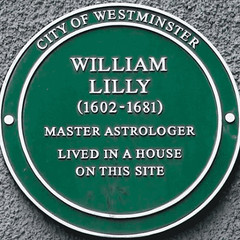