Sir John Barbirolli CH (né Giovanni Battista Barbirolli; 2 December 1899 – 29 July 1970) was a British conductor and cellist. He is remembered above all as conductor of the Hallé Orchestra in Manchester, which he helped save from dissolution in 1943 and conducted for the rest of his life. Earlier in his career he was Arturo Toscanini's successor as music director of the New York Philharmonic, serving from 1936 to 1943. He was also chief conductor of the Houston Symphony from 1961 to 1967, and was a guest conductor of many other orchestras, including the BBC Symphony Orchestra, London Symphony Orchestra, the Philharmonia, the Berlin Philharmonic and the Vienna Philharmonic, with all of which he made recordings. Born in London of Italian and French parentage, Barbirolli grew up in a family of professional musicians. After starting out as a cellist, he was given the chance to conduct, from 1926 with the British National Opera Company, and then with Covent Garden's touring company. On taking up the conductorship of the Hallé he had less opportunity to work in the opera house, but in the 1950s he conducted productions of works by Verdi, Wagner, Gluck, and Puccini at Covent Garden with such success that he was invited to become the company's permanent musical director, an invitation he declined. Late in his career he made several recordings of operas, of which his 1967 set of Puccini's Madama Butterfly for EMI is probably the best known. Both in the concert hall and on record, Barbirolli was particularly associated with the music of English composers such as Elgar, Delius and Vaughan Williams. His interpretations of other late Romantic composers, such as Mahler and Sibelius, as well as of earlier classical composers, including Schubert, are also still admired. 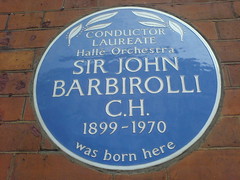 Southampton Row, Camden, London, United Kingdom where they was born (1899)

Marchmont Street, London, United Kingdom where they was