Ronald Frederick Lane (1 April 1946 – 4 June 1997) was an English musician, songwriter, and producer who is best known as the bass guitarist and founding member of two prominent English rock and roll bands: Small Faces (1965–69) and subsequently Faces (1969–73). With Small Faces he was nicknamed "Plonk". After their breakup and re-formation as Faces, he acquired the nickname "Three-Piece". In 1973, Lane quit Faces. Subsequently, he collaborated with other musicians, leading his own bands and pursuing a solo career, while remaining close to his former bandmates. In 1977, he was diagnosed with multiple sclerosis. He was supported by charity projects and financial contributions from friends, former bandmates and fans. After suffering from the disease for 21 years, he died aged 51. For his work in both Small Faces and Faces, Lane was inducted posthumously into the Rock and Roll Hall of Fame in 2012. 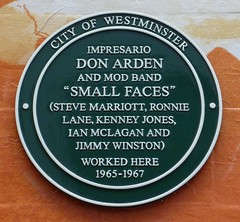