athlete, Commander of the Most Excellent Order of the British Empire, 1st sub-four minute mile runner (from 1954), Knight Bachelor (from 1975), and Companion of Honour (from 2016)

Sir Roger Gilbert Bannister CH CBE FRCP (23 March 1929 – 3 March 2018) was an English middle-distance athlete and neurologist who ran the first sub-4-minute mile. At the 1952 Olympics in Helsinki, Bannister set a British record in the 1500 metres and finished in fourth place. This achievement strengthened his resolve to become the first athlete to finish the mile run in under four minutes. He accomplished this feat on 6 May 1954 at Iffley Road track in Oxford, with Chris Chataway and Chris Brasher providing the pacing. When the announcer, Norris McWhirter, declared "The time was three...", the cheers of the crowd drowned out Bannister's exact time, which was 3 minutes and 59.4 seconds. He had attained this record with minimal training, while practising as a junior doctor. Bannister's record lasted just 46 days. Bannister went on to become a neurologist and Master of Pembroke College, Oxford, before retiring in 1993. As Master of Pembroke, he was on the governing body of Abingdon School from 1986 to 1993. When asked whether the 4-minute mile was his proudest achievement, he said he felt prouder of his contribution to academic medicine through research into the responses of the nervous system. Bannister was patron of the MSA Trust. He was diagnosed with Parkinson's disease in 2011. 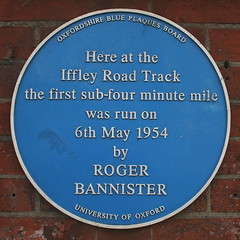 Sir Roger Bannister while a medical student at St. Mary’s Hospital Medical School from 1951-54, trained on the cinder track on this site in preparation for the first under 4 minute mile run in Oxford on 6th May 1954.