woman and Countess of Warwick

Frances Evelyn "Daisy" Greville, Countess of Warwick (née Maynard; 10 December 1861 – 26 July 1938) was a British socialite and philanthropist. Although embedded in late-Victorian British high society, she was also a campaigning socialist, supporting many schemes to aid the less well off in education, housing, employment, and pay. She established colleges for the education of women in agriculture and market gardening, first in Reading, then in Studley. She established a needlework school and employment scheme in Essex as well as using her ancestral homes to host events and schemes for the benefit of her tenants and workers. Greville was a long-term confidant or mistress to the Prince of Wales, who later became King Edward VII. She was said to be referenced in the popular music hall song "Daisy, Daisy", owing to her rather unorthodox conduct. 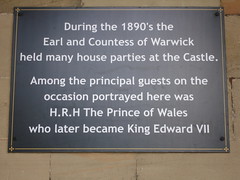