The Red Bull was an inn-yard conversion erected in Clerkenwell, London operating in the 17th century. For more than four decades, it entertained audiences drawn primarily from the City and its suburbs, developing a reputation over the years for rowdiness. After Parliament closed the theatres in 1642, it continued to host illegal performances intermittently, and when the theatres reopened after the Restoration, it became a legitimate venue again. There is a myth that it burned down in the Great Fire of London but the direct reason for its end is unclear. 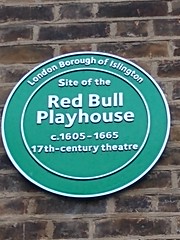