Sir Timothy John Berners-Lee OM KBE FRS FREng FRSA FBCS (born 8 June 1955), also known as TimBL, is an English computer scientist best known as the inventor of the World Wide Web. He is a Professorial Fellow of Computer Science at the University of Oxford and a professor at the Massachusetts Institute of Technology (MIT). Berners-Lee proposed an information management system on 12 March 1989, then implemented the first successful communication between a Hypertext Transfer Protocol (HTTP) client and server via the Internet in mid-November. Berners-Lee is the director of the World Wide Web Consortium (W3C), which oversees the continued development of the Web. He co-founded (with his wife-to-be Rosemary Leith) the World Wide Web Foundation. He is a senior researcher and holder of the 3Com founder's chair at the MIT Computer Science and Artificial Intelligence Laboratory (CSAIL). He is a director of the Web Science Research Initiative (WSRI) and a member of the advisory board of the MIT Center for Collective Intelligence. In 2011, he was named as a member of the board of trustees of the Ford Foundation. He is a founder and president of the Open Data Institute and is currently an advisor at social network MeWe. In 2004, Berners-Lee was knighted by Queen Elizabeth II for his pioneering work. He devised and implemented the first Web browser and Web server, and helped foster the Web's subsequent explosive development. He currently directs the W3 Consortium, developing tools and standards to further the Web's potential. In April 2009, he was elected as Foreign Associate of the National Academy of Sciences. He was named in Time magazine's list of the 100 Most Important People of the 20th century and has received a number of other accolades for his invention. He was honoured as the "Inventor of the World Wide Web" during the 2012 Summer Olympics opening ceremony in which he appeared working with a vintage NeXT Computer. He tweeted "This is for everyone" which appeared in LCD lights attached to the chairs of the audience. He received the 2016 Turing Award "for inventing the World Wide Web, the first web browser, and the fundamental protocols and algorithms allowing the Web to scale". 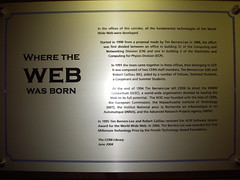 Where The Web was born. In the offices of this corridor, all the fundamental technologies of the World Wide Web were developed. Started in 1990 from a proposal made by Tim Berners-Lee in 1989, the effort was first divided between an office in building 31 of the Computing and Networking Division (CN) and one in building 2 of the Electronics and Computing for Physics Division (ECP). In 1991 the team came together in these offices, then belonging to ECP. It was composed of two CERN staff members, Tim Berners-Lee (GB) and Robert Cailliau (BE), aided by a number of Fellows, Technical Students, a Coopérant and Summer Students. At the end of 1994 Tim Berners-Lee left CERN to direct the WWW consortium (W3C), a world-wide organization devoted to leading the Web to its full potential. The W3C was founded with the help of CERN, the European Commission, the Massachusetts Institute of Technology (MIT), the Institut National pour la Recherche en Informatique et en Automatique (INRIA), and the Advanced Research Projects Agency (ARPA). In 1995 Tim Berners-Lee and Robert Cailliau received the ACM Software System Award for the World Wide Web. In 2004, Tim Berners-Lee was awarded the first Millenium Technology Prize by the Finnish Technology Award Foundation. The CERN Library June 2004

European Organization for Nuclear Research, CERN CH-1211, Geneva, Switzerland where they developed the fundamental technologies of the World Wide Web