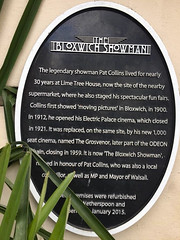 The Bloxwich Showman The legendary showman Pat Collins lived for nearly 30 years at Lime Tree House, now the site of the nearby supermarket, where he also staged his spectacular fun fairs. Collins first showed 'moving pictures' in Bloxwich, in 1900. In 1912, he opened his Electric Palace cinema, which closed in 1921. It was replaced, on the same site, by his new 1,000 seat cinema, named The Grosvenor, later part of the ODEON chain, closing in 1959. It is now 'The Bloxwich Showman', named in honour of Pat Collins, who was also a local councillor, as well as MP and Mayor of Wallsall.

156 High St, Bloxwich, United Kingdom where they was