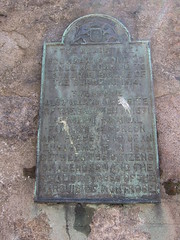 The Crabstone. Boundary stone of the lands belonging to John Crab, Baillie of the Burgh in 1314. The stone also marks the site of the skirmish in 1571 between the rival families of Gordon and Forbes and of an engagement in 1644 between the citizens of Aberdeen and the royalist forces of the Marquis of Montrose.