Golden Cap is a hill and cliff situated on the English Channel coast between Bridport and Charmouth in Dorset, England. The cliffs are the highest point on the south coast of Great Britain. The name derives from the distinctive outcropping of golden greensand rock present at the very top of the cliff. The hill is owned by the National Trust and forms part of the Jurassic Coast, a World Heritage Site. The Jurassic Coast is 155 kilometres (96 mi) in length, running from Orcombe Point near Exmouth, in the west, to Old Harry Rocks on the Isle of Purbeck, in the east. The coastal exposures along the coastline provide a continuous sequence of Triassic, Jurassic and Cretaceous rock formations spanning approximately 185 million years of the Earth's history. The Jurassic Coast contains a large range of important fossil sites. Golden Cap stands at 191 metres (627 ft) and is visible for tens of miles along the coastline. The hill is accessible via a coastal footpath from Seatown, and takes around 40 minutes to reach the summit. Behind the cliff is Langdon Wood, a small wood of mainly Corsican Pine, planted in the 1950s, whose trees originate from a nearby copse known as "Eleanor's Clump". Langdon is owned by the National Trust, and encompasses a circular walk of approximately one mile. The base of the cliff is covered with large boulders, and is popular with fossil collectors. Storms have previously exposed fossilised ammonites and belemnites in the Blue Lias base. 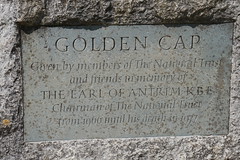 Golden Cap. Given by members of the National Trust and friends in memory of THE EARL OF ANTRIM KBE Chairman of the national Trust from 1966 until his death in 1977