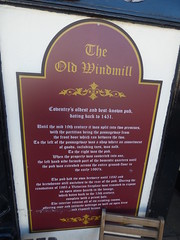 The Old Windmill Coventry's oldest and best-known pub, dating back to 1451. Until the 19th century it was split into two premises, with the partition being the passageway from the front door which ran between the two. To the left of the passageway was a shop where an assortment of goods, including toys, was sold. To the right was the pub. When the property was converted into one, the left hand side formed part of the domestic quarters until the pub was extended across the entire ground floor in the early 1980's. The pub had it's own brewery until 1930 and the brewhouse still survives to the rear of the pub. During the renovation of 1985 a Victorian fireplace was removed to expose an open stove hearth in the lounge, which dates back to the 15th century, complete with a priest hole. The interior retains all of it's existing rooms, offering cosy and intimate settings as well as open fires and exposed beams.