engineer, Commander of the Most Excellent Order of the British Empire, and Fellow of the Royal Society

Sir Archibald Russell, CBE, FRS (30 May 1904 – 29 May 1995) was a British aerospace engineer who worked most of his career at the Bristol Aeroplane Company, before becoming managing director of the Filton Division when Bristol merged into British Aircraft Corporation in 1960. He also served as the vice-chairman of the BAC-Sud Aviation Concorde Committee that produced the Concorde, working alongside Morien Morgan. His designs include the Blenheim, Britannia, Type 188 and many others. He was known throughout his career as a perfectionist, as well as his criticism for those who did not measure up – criticisms that included ministers, civil servants, the Brabazon Committee and BOAC. 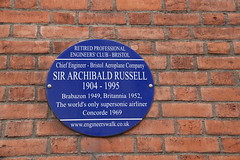