Cripplegate was a gate in the London Wall and a name for the region of the City of London outside the gate. The area was almost entirely destroyed in the Blitz of World War II and today it is the site of the Barbican Estate and Barbican Centre. The name is preserved in the church of St Giles-without-Cripplegate, in the Cripplegate ward of the City, and in a small road named Cripplegate Street which lies slightly to the north of the site of the Wall between Viscount Street and Bridgewater Street. The ward of Cripplegate straddles the former line of the Wall and the old gate, and remains divided into "Within" and "Without" parts, with a beadle and a deputy (alderman) appointed for each part. Since the 1994 (City) and 2003 (ward) boundary changes, most of the ward is Without, with the ward of Bassishaw having expanded considerably into the Within area. 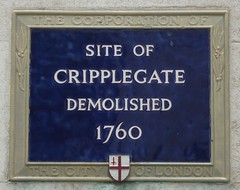 Wood Street, EC2Y 5BA, London, United Kingdom where it was