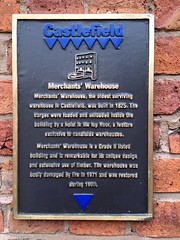 Merchants' Warehouse. Merchants' Warehouse, the oldest surviving warehouse in Castlefield, was built in 1825. The barges were loaded and unloaded inside the building by a hoist in the top floor, a feature exclusive to canalside warehouses. Merchants' warehouse is a Grade II listed building and is remarkable for its unique design and extensive use of timber. The warehouse was badly damaged by fire in 1971 and was restored during 1995.