Edward Lear (12 May 1812, Holloway – 29 January 1888, Sanremo) was an English artist, illustrator, musician, author and poet, now known mostly for his literary nonsense in poetry and prose and especially his limericks, a form he popularised. His principal areas of work as an artist were threefold: as a draughtsman employed to make illustrations of birds and animals; making coloured drawings during his journeys, which he reworked later, sometimes as plates for his travel books; and as a (minor) illustrator of Alfred, Lord Tennyson's poems. As an author, he is known principally for his popular nonsense collections of poems, songs, short stories, botanical drawings, recipes and alphabets. He also composed and published twelve musical settings of Tennyson's poetry in poem. 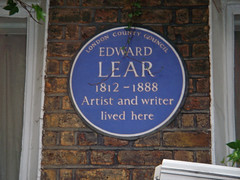 In Elizabethan times a favourite spot for archery contests. Edward Lear 1812-1888 born and lived nearby in Bowman's Lodge

Bowman’s Mews, Seven Sisters Road, Islington, London, United Kingdom where they was born near (1812) and lived near

15 Stratford Place, Westminster, W1C, 1BE, London, United Kingdom where they made a house on this site his London home and studio (1853-1869)