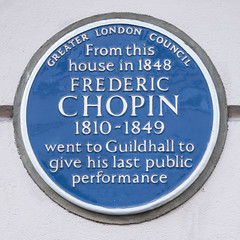 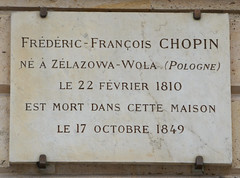 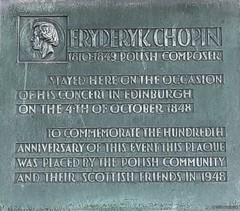 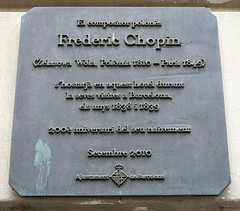 Notre-Dame de la Garde, Notre-Dame du Mont, Marseille, France where they played the organ in this church at the funeral of tenor Adolphe Nourrit (1839)

English translation: The Polish composer Frederic Chopin (Zelazowa Wola, Poland 1810 - Paris 1849) stayed in this hotel during visits to Barcelona in the years 1838 and 1839. 200th anniversary of his birth, September 2010.

Fryderyk Chopin Born 1810, Żelazowa Wola, Poland Died 1849, Paris, France Fryderyk Chopin was one of the world’s greatest musical composers. His compositions combined elements of his beloved Polish culture with universal ones , which gave his music wide international appeal. He visited Manchester in the year before his death at the early age of 39. On Monday, August 28th, 1848, a gravely ill Fryderyk Chopin gave a Gala Concert before a rapturous audience of 1200 at the Gentlemen’s Concert Hall, which was situated at the corner of Peter Street and Lower Moseley Street. Despite serious Ill-health he insisted that he would perform, a fact which has forever endeared him to Mancunians and music lovers everywhere.

, Manchester, United Kingdom where they performed (1848)