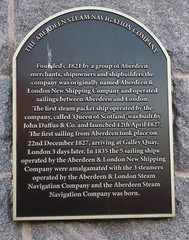 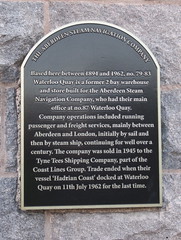 The Aberdeen Steam Navigation Company Based here between 1894 and 1962, no. 79-83 Waterloo Quay is a former 2 bay warehouse and store built for the Aberdeen Steam Navigation Company who had their main office at no. 87 Waterloo Quay. Company operations included running passenger and freight services, mainly between Aberdeen and London, initially by sail and then steam ship, continuing for well over a century. The company was sold in 1945 to the Tyne Tees Shipping Company, part of the Coast Lines Group. Trade ended when their vessel 'Hadrian Coast' docked at Waterloo Quay on 11th July 1962 for the last time.