football legend of Peckham and footballer

Rio Gavin Ferdinand (born 7 November 1978) is an English former professional footballer who played as a centre-back. He played 81 times for the England national football team between 1997 and 2011, and was a member of three FIFA World Cup squads. He is regarded by many to be one of England's greatest ever players and he is one of the most decorated English footballers of all time. Ferdinand began his football career playing for various youth teams, finally settling at West Ham United where he progressed through the youth ranks and made his professional Premier League debut in 1996. He became a fan favourite, winning the 'Hammer of the Year award' the following season. He earned his first senior international cap in a match against Cameroon in 1997, setting a record as the youngest defender to play for England at the time. His achievements and footballing potential attracted Leeds United and he transferred to the club for a record-breaking fee of £18 million. He spent two seasons at the club, becoming the team captain in 2001. He joined Manchester United in July 2002 for around £30 million, breaking the transfer fee record once more. He won the Premier League, his first major club honour, in a successful first season at the club. In September 2003, he missed a drugs test and was banned from competition for eight months from January until September 2004, causing him to miss half a Premier League season, Manchester United's FA Cup triumph, and the Euro 2004 international competition. Upon his return, he established himself in the Manchester United first team and received plaudits for his performances, featuring in the PFA Team of the Year four times in five years. More club success followed with another Premier League win in the 2006–07 season and a Premier League and UEFA Champions League double the following year. His career at United, in which he won 6 Premier League titles and over 15 trophies, ended when his contract expired in 2014, and he subsequently joined Queens Park Rangers where he played for just one season before being released from the club as a result of their relegation from the Premier League. He announced his retirement from professional football on 30 May 2015. His brother, Anton, also a centre-back, plays for Southend United, and former England international striker Les Ferdinand and Dagenham & Redbridge midfielder Kane Ferdinand are his cousins. 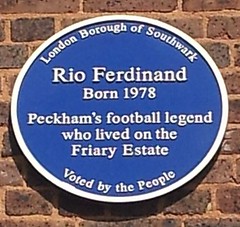