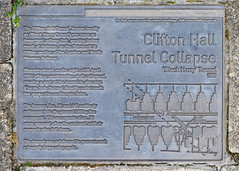 Clifton Hall Tunnel Collapse ‘Black Harry’ Tunnel 1953 The Clifton Hall Tunnel, known locally as ‘Black Harry Tunnel’ was once an important railway link, passing below much of Swinton, on the Patricroft to Clifton section of the London and North Western Railway. Disaster struck on the night of the 28 April 1953 after a construction shaft collapsed, causing a part of the tunnel to give way. A large hole formed directly underneath two properties on Temple Drive. The houses, (no. 22 and 24) suddenly collapsed into the ground killing five occupants. The occupants of no. 26 were rescued after the end wall of their property also fell down. The tunnel was reinforced to prevent such a tragedy happening again.

Temple Drive, Swinton, United Kingdom where it was