Sir Isaiah Berlin OM CBE FBA (6 June 1909 – 5 November 1997) was a Russian-British social and political theorist, philosopher, and historian of ideas. Although he became increasingly averse to writing for publication, his improvised lectures and talks were sometimes recorded and transcribed, and many of his spoken words were converted into published essays and books, both by himself and by others, especially his principal editor from 1974, Henry Hardy. Born in Riga (now the capital of Latvia, then a part of the Russian Empire) in 1909, he moved to Petrograd, Russia, at the age of six, where he witnessed the revolutions of 1917. In 1921 his family moved to the UK, and he was educated at St Paul's School, London, and Corpus Christi College, Oxford. In 1932, at the age of twenty-three, Berlin was elected to a prize fellowship at All Souls College, Oxford. In addition to his own prolific output, he translated works by Ivan Turgenev from Russian into English and, during World War II, worked for the British Diplomatic Service. From 1957 to 1967 he was Chichele Professor of Social and Political Theory at the University of Oxford. He was president of the Aristotelian Society from 1963 to 1964. In 1966, he played a critical role in creating Wolfson College, Oxford, and became its founding President. Berlin was appointed a CBE in 1946, knighted in 1957, and appointed to the Order of Merit in 1971. He was President of the British Academy from 1974 to 1978. He also received the 1979 Jerusalem Prize for his lifelong defence of civil liberties, and on 25 November 1994 he received the honorary degree of Doctor of Laws at the University of Toronto, for which occasion he prepared a "short credo" (as he called it in a letter to a friend), now known as "A Message to the Twenty-First Century", to be read on his behalf at the ceremony. An annual Isaiah Berlin Lecture is held at the Hampstead Synagogue, at Wolfson College, Oxford, at the British Academy, and in Riga. Berlin's work on liberal theory and on value pluralism, as well as his opposition to Marxism and Communism, has had a lasting influence. 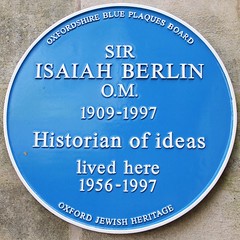