Carl Maria von Weber (18 or 19 November 1786 – 5 June 1826) was a German composer, conductor, virtuoso pianist, guitarist, and critic who was one of the first significant composers of the Romantic era. Best known for his operas, he was a crucial figure in the development of German Romantische Oper (German Romantic opera). Throughout his youth, his father, , relentlessly moved the family between Hamburg, Salzburg, Freiberg, Augsburg and Vienna. Consequently he studied with many teachers – his father, Johann Peter Heuschkel, Michael Haydn, Giovanni Valesi, Johann Nepomuk Kalcher and Georg Joseph Vogler – under whose supervision he composed four operas, none of which survive complete. He had a modest output of non-operatic music, which includes two symphonies; a bassoon concerto; piano pieces such as Konzertstück in F minor and Invitation to the Dance; and many pieces that featured the clarinet, usually written for the virtuoso clarinetist Heinrich Baermann. His mature operas—Silvana (1810), Abu Hassan (1811), Der Freischütz (1821), Die drei Pintos (comp. 1820–21), Euryanthe (1823), Oberon (1826)—had a major impact on subsequent German composers including Marschner, Meyerbeer, and Wagner; his compositions for piano influenced those of Chopin and Liszt. His best known work, Der Freischütz, remains among the most significant German operas. 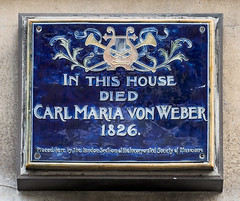 103 Great Portland Street, W1, London, United Kingdom where they was