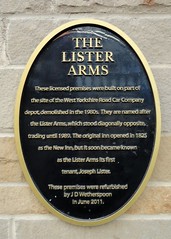 The Lister Arms. These licensed premises were built on part of the site of the West Yorkshire Road Car Company depot, demolished in the 1980s. They are named after the Lister Arms, which stood diagonally opposite, trading until 1989. The original inn opened in 1825 as the New Inn but it soon became known as the Lister Arms its first tenant, Joseph Lister.