Thomas P. Lewis (March 17, 1940 – April 4, 2008) was an artist and peace activist, primarily noted for his participation with the Baltimore Four and the Catonsville Nine. 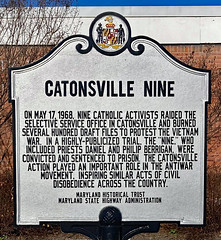 Catonsville Nine. On May 17, 1968, nine Catholic activists raided the Selective Service Office in Catonsville and burned several hundred draft files to protest the Vietnam War. In a highly-publicized trial, the “Nine,” who included priests Daniel and Philip Berrigan, were convicted and sentenced to prison. The Catonsville action played an important role in the antiwar movement, inspiring similar acts of civil disobedience across the country.