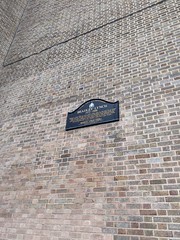 Globe Town Neighbourhood Bradley Lynch 1972-1988 Bradley Lynch was a local youth who died at the age of 16 years from cancer. Before his death he work selflessly and very hard to raise funds for the fight against the disease from which he was suffering. His courage and sacrifice for others are an inspiration to all people especially the young. 11-55 Morpeth Street was renamed Bradley Lynch Court on the 2nd May1989 by councillor Barrie Duffey Mayor of Tower Hamlets

11-55 Morpeth Street, London, United Kingdom where they lived near