film producer and Knight Bachelor (from 1942)

Sir Alexander Korda (/ˈkɔːrdə/; born Sándor László Kellner, 16 September 1893 – 23 January 1956) was a Hungarian-born British film director, producer and screenwriter, who founded his own film production studios and film distribution company. Born in Hungary, where he began his career, he worked briefly in the Austrian and German film industries during the era of silent films, before being based in Hollywood from 1926 to 1930 for the first of his two brief periods there (the other was during World War II). The change led to a divorce from his first wife, the Hungarian film actress María Corda, who was unable to make the transition from silent films to "talkies" because of her strong Hungarian accent. From 1930, Korda was active in the British film industry, and soon became one of its leading figures. He was the founder of London Films and, post-war, the owner of British Lion Films, a film distribution company. Korda produced many outstanding classics of the British film industry, including The Private Life of Henry VIII, Rembrandt, Things To Come, The Thief of Baghdad and The Third Man. In 1942, Korda became the first filmmaker to receive a knighthood. 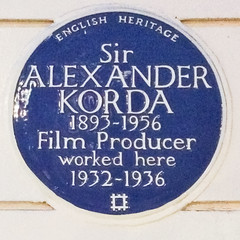