Roger Eliot Fry (14 December 1866 – 9 September 1934) was an English painter and critic, and a member of the Bloomsbury Group. Establishing his reputation as a scholar of the Old Masters, he became an advocate of more recent developments in French painting, to which he gave the name Post-Impressionism. He was the first figure to raise public awareness of modern art in Britain, and emphasised the formal properties of paintings over the "associated ideas" conjured in the viewer by their representational content. He was described by the art historian Kenneth Clark as "incomparably the greatest influence on taste since Ruskin ...In so far as taste can be changed by one man, it was changed by Roger Fry". The taste Fry influenced was primarily that of the Anglophone world, and his success lay largely in alerting an educated public to a compelling version of recent artistic developments of the Parisian avant-garde. 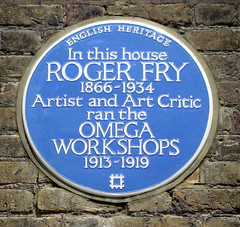 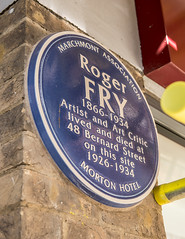 48 Bernard Street, London, United Kingdom where they was