Sir John Everett Millais, 1st Baronet, PRA (UK: /ˈmɪleɪ/ MIL-ay, US: /mɪˈleɪ/ mil-AY; 8 June 1829 – 13 August 1896) was an English painter and illustrator who was one of the founders of the Pre-Raphaelite Brotherhood. He was a child prodigy who, aged eleven, became the youngest student to enter the Royal Academy Schools. The Pre-Raphaelite Brotherhood was founded at his family home in London, at 83 Gower Street (now number 7). Millais became the most famous exponent of the style, his painting Christ in the House of His Parents (1849–50) generating considerable controversy, and he produced a picture that could serve as the embodiment of the historical and naturalist focus of the group, Ophelia, in 1851–52. By the mid-1850s, Millais was moving away from the Pre-Raphaelite style to develop a new form of realism in his art. His later works were enormously successful, making Millais one of the wealthiest artists of his day, but some former admirers including William Morris saw this as a sell-out (Millais notoriously allowed one of his paintings to be used for a sentimental soap advertisement). While these and early 20th-century critics, reading art through the lens of Modernism, viewed much of his later production as wanting, this perspective has changed in recent decades, as his later works have come to be seen in the context of wider changes and advanced tendencies in the broader late nineteenth-century art world, and can now be seen as predictive of the art world of the present. Millais's personal life has also played a significant role in his reputation. His wife Effie was formerly married to the critic John Ruskin, who had supported Millais's early work. The annulment of the Ruskin marriage and Effie's subsequent marriage to Millais have sometimes been linked to his change of style, but she became a powerful promoter of his work and they worked in concert to secure commissions and expand their social and intellectual circles. 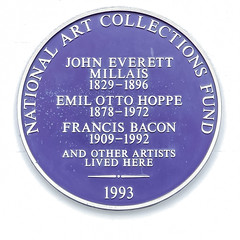 The Octogon. While staying in this house in 1870 Sir John Everett Millais PRA, painted his famous picture, "The Boyhood of Raleigh"

South Parade, Budleigh Salterton, United Kingdom where they stayed (1870) and painted his famous picture, "The Boyhood of Raleigh" (1870)

Elizabeth Siddal 1829-1862 Significant artist and poet with works at Wightwick Manor and the Ashmolean. She was painted by the artists of the Pre-Raphaelite Brotherhood and was the model for Millais' painting Ophelia (1852) She is buried in Highgate Cemetery.