A crown is a traditional form of head adornment, or hat, worn by monarchs as a symbol of their power and dignity. A crown is often, by extension, a symbol of the monarch's government or items endorsed by it. The word itself is used, particularly in Commonwealth countries, as an abstract name for the monarchy itself, as distinct from the individual who inhabits it (see The Crown). A specific type of crown (or coronet for lower ranks of peerage) is employed in heraldry under strict rules. Indeed, some monarchies never had a physical crown, just a heraldic representation, as in the constitutional kingdom of Belgium, where no coronation ever took place; the royal installation is done by a solemn oath in parliament, wearing a military uniform: the King is not acknowledged as by divine right, but assumes the only hereditary public office in the service of the law; so he in turn will swear in all members of "his" federal government. 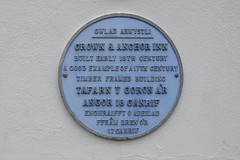