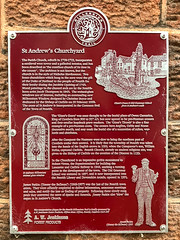 St Andrew's Churchyard The Parish Church, rebuilt in 1720-1722, incorporates a medieval west tower and a galleried interior, and has been described as ‘the stateliest church of its time in the county', The architect is not known, but the church is in the style of Nicholas Hawksmoor. Two brass chandeliers which hang in the nave were the gift of the Duke of Portland to the people of Penrith for their loyalty during the Jacobite Uprising of 1745, Mural paintings in the chancel arch are by the Penrith-born artist Jacob Thompson in 1845. The stained glass windows are of interest, including an outstanding new Millennium Window, designed by Christine Boyce and dedicated by the Bishop of Carlisle on 20 Februzry 2000. The cross of St Andrew is incorporated in the Common Sealof the Town of Penrith The ‘Giant's Grave' was once thought to be the burial place of Owen Caesarius, King of Cumbria from 900 to 937 AD, but now agreed to be pre-Norman crosses and four smaller hogsback grave markers. The “Giant's Thumb' is also a fine example of a pre Norman cross. The crosses have Anglian, Celtic and Norse decorative motifs, and may mark the burial site of a succession of rulers, war lords and chieftains. After the Conquest the Normans were slow to bring the northern part of Cambria under their control. It is Merely that the township of Penrith was taken into the hands of the English crown in 1092, when the Conqueror's son, William Rufus, captured Carlisle, Penrith Church, already an ancient religious site, was given to the Bishop of Carlisle on the creation of the Diocese in 1133, In the Churchyard is an impressive gothic monument to Robert Virtue, the Superintendent for building the Lancaster and Carlisle Railway in 1846, marking a turning point in the development of the town. The Old Grammar School was restored in 1857, and is now incorporated into the Penrith Library and Devonshire Arcade, opened in 1991. James Parkin (‘Jimmy the Bellman') (1846-1907) was the last of the Penrith town criers. They were officially employed to deliver information, announce meetings and sales, and notify the loss or finding of property. Following three slowly rung peals they conveyed the news of deaths and funerals. Jimmy Parkin also ‘blew’ the organ in St Andrew's Church.

St Andrews Place, Penrith, United Kingdom where it was