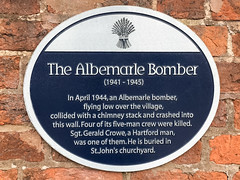 The Albemarle Bomber (1941-1945) In April 1944, an Albemarle Bomber, flying low over the village, collided with a chimney stack and crashed into this wall. Four of its five-man crew were killed. Sgt. Gerald Crowe, a Hartford man, was one of them. He is buried in St. John's churchyard.

Chester Road, Hartford, United Kingdom where they died near (1944)