Lionel Thomas Caswall Rolt (usually abbreviated to Tom Rolt or L. T. C. Rolt) (11 February 1910 – 9 May 1974) was a prolific English writer and the biographer of major civil engineering figures including Isambard Kingdom Brunel and Thomas Telford. He is also regarded as one of the pioneers of the leisure cruising industry on Britain's inland waterways, and was an enthusiast for vintage cars and heritage railways. 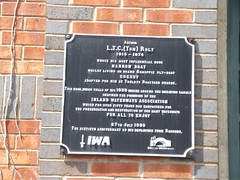 Author L. T. C. (Tom) Rolt 1910-1974 wrote his most influential book Narrow Boat whilst living on board Shroppie fly-boat Cressy adapted for him at Tooleys Boatyard nearby. This book, which tells of his 1939 cruise around the decaying canals inspired the founding of the Inland Waterways Association which for over fifty years has campaigned for the preservation and restoration of our many waterways for all to enjoy. 27th July 1999 The sixtieth anniversary of his departure from Banbury

L. T. C. Rolt. Lionel Thomas Caswell Rolt, Engineer and Writer was born at Chester on 11 February 1910 and died at Stanley Pontlarge, Gloucestershire on 9 May 1947. Tom Rolt's love and understanding of the canals and of life on the inland waterways drew him from an engineering career to live and travel the waterways in his narrow boat 'Cressy'. The account in his celebrated book 'Narrow Boat' of his pre-war four hundred mile journey led directly to the formation of the inland waterways association in 1946. The success of the I W A in halting the dereliction of the canal system and ensuring its survival owes immeasurably to Rolt's vision. His energy and influence of his writings extending into the wide and varied sphere of what become industrial archaeology continue to enrich the lives of many. To commemorate his achievements and celebrate the founding of the association the Chester and District Branch of the I W A placed this plaque here.

?, Chester, United Kingdom where they was