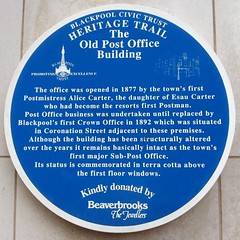 The Old Post Office Building The office was opened in 1877 by the town's first Postmistress Alice Carter, the daughter of Esau Carter who had become the resorts first Postman. Post Office business was undertaken until replaced by Blackpool's first Crown Office in 1892 which was situated in Coronation Street adjacent to these premises. Although the building has been structurally altered over the years it remains basically intact as the town's first major Sub-Post Office. Its status is commemorated in terra cotta above the first floor windows.

57/59 Church Street, Blackpool, United Kingdom where they was