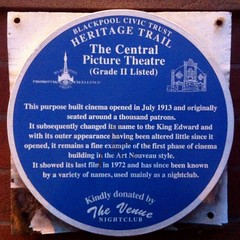 The Central Picture Theatre This purpose built cinema opened in July 1913 and originally seated around a thousand patrons. It subsequently changed its name to the King Edward and opened, it remains a fine example of the first phase of cinema building in the Art Nouveau style. It showed its last film in 1972 and has since been known by a variety of names, used mainly as a nightclub.

Central Drive, Blackpool, United Kingdom where it was