George Smith Patton Jr. (November 11, 1885 – December 21, 1945) was a general in the United States Army who commanded the Seventh United States Army in the Mediterranean theater of World War II, and the Third United States Army in France and Germany after the Allied invasion of Normandy in June 1944. Born in 1885, Patton attended the Virginia Military Institute and the United States Military Academy at West Point. He studied fencing and designed the M1913 Cavalry Saber, more commonly known as the "Patton Saber". He competed in modern pentathlon in the 1912 Summer Olympics in Stockholm, Sweden. Patton entered combat during the Pancho Villa Expedition of 1916, the United States' first military action using motor vehicles. He fought in World War I as part of the new United States Tank Corps of the American Expeditionary Forces: he commanded the U.S. tank school in France, then led tanks into combat and was wounded near the end of the war. In the interwar period, Patton became a central figure in the development of the army's armored warfare doctrine, serving in numerous staff positions throughout the country. At the United States' entry into World War II, he commanded the 2nd Armored Division. Patton led U.S. troops into the Mediterranean theater with an invasion of Casablanca during Operation Torch in 1942, and soon established himself as an effective commander by rapidly rehabilitating the demoralized II Corps. He commanded the U.S. Seventh Army during the Allied invasion of Sicily, where he was the first Allied commander to reach Messina. There he was embroiled in controversy after he slapped two shell-shocked soldiers, and was temporarily removed from battlefield command. He was assigned a key role in Operation Fortitude, the Allies' military deception campaign for Operation Overlord. At the start of the Western Allied invasion of France, Patton was given command of the Third Army, which conducted a highly successful rapid armored drive across France. Under his decisive leadership, the Third Army took the lead in relieving beleaguered American troops at Bastogne during the Battle of the Bulge, after which his forces drove deep into Nazi Germany by the end of the war. During the Allied occupation of Germany, Patton was named military governor of Bavaria, but was relieved for making aggressive statements towards the Soviet Union and trivializing denazification. He commanded the United States Fifteenth Army for slightly more than two months. Severely injured in an auto accident, he died in Germany twelve days later, on December 21, 1945. Patton's colorful image, hard-driving personality, and success as a commander were at times overshadowed by his controversial public statements. His philosophy of leading from the front, and his ability to inspire troops with attention-getting, vulgarity-laden speeches, such as his famous address to the Third Army, was received favorably by his troops, but much less so by a sharply divided Allied high command. His sending the doomed Task Force Baum to liberate his son-in-law, Lieutenant Colonel John K. Waters, from a prisoner-of-war camp further damaged his standing with his superiors. His emphasis on rapid and aggressive offensive action proved effective, and he was regarded highly by his opponents in the German High Command. An award-winning biographical film released in 1970, Patton, helped popularize his image. 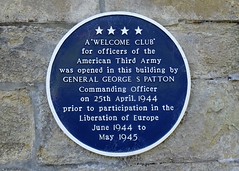 12th Armored Division at Camp Barkeley. Established as a U.S. Army training camp in 1940, Camp Barkeley (whose main entrance was about seven miles south of this site) became one of the nation's largest World War II military training bases. The 12th Armored Division, activated at Camp Campbell, Kentucky, in September 1942, was assigned to Camp Barkeley in November 1943. By April 1944 the manpower of the division was at peak strength with combat commands, three battalions each of tanks, armored infantry, and armored field artillery, and numerous support units. Intensive day and night training at the camp culminated in tests that qualified the division for combat. Camp Barkeley's population was more than twice that of the city of Abilene. Soldiers' families became a part of the community and many returned here to live. The last combat division stationed at Camp Barkeley, the 12th Armored shipped out to Europe in September 1944. The division, nicknamed "Hellcats" and dubbed "The Mystery Division" in General George S. Patton, Jr.'s historic drive to the Rhine River, served with distinction, receiving more than 800 battle decorations. A dominating presence in Abilene during the war, Camp Berkeley was deactivated on April 1, 1945. (1992) #22

FM 3438, near intersection w/ Hartford St., Abilene, TX, United States where they was

Second Armored Division, U. S. Army. Gen. Patton's "Hell on Wheels," the 2nd Armored Division, United States Army Formed to meet 20th century challenges, this force includes Battery A, 1st Battalion, 3rd Field Artillery, which has been in service since 1778. That battery and other veteran units have found new capabilities in this age of mechanized combat involving lightning mobility and massive firepower. In 1940, as German panzers overran France, the United States Congress created the 1st and 2nd American Armored Divisions. The 2nd was organized July 15, 1940, at Fort Benning, Ga., by Gen. Charles L. Scott, and received its "Hell on Wheels" name in 1941 from Gen. George S. Patton, Jr. First U.S. armored force in combat in World War II, "Hell on Wheels" landed in North Africa on Nov. 8, 1942. It won great victories at Safi and Casablanca, in the assault on Sicily, the 1944 Normandy invasion, the Battle of the Bulge, and other campaigns. Along 11,702 miles of combat advance, the 2nd won 7 French Croix de Guerres, 19 Distinguished Unit citations, and was first foreign division ever given the Fourragere of Belgium. The 2nd provided Honor Guard for President Harry S. Truman at the Potsdam peace conference. Since 1945 Fort Hood has been 2nd's permanent base. (1975) #37

?, Killeen, TX, United States where they was

Staff Officers' Quarters. The U.S. Army built nine stone officers' quarters at Fort Clark beginning in 1873. The need soon arose for additional housing for senior staff officers, and this building was constructed in 1888. Built in a T-plan, the two-story stone duplex features a full width front porch and is a good example of military standard housing adapted to the materials and climate of the region. Among the house's residents was General George S. Patton. Recorded Texas Historic Landmark - 1990 #5086

A 'Welcome Club' for officers of the American Third Army was opened in this building by General George S Patton Commanding Officer on 25th April, 1944 prior to participation in the Liberation of Europe June 1944 to May 1945

The Ruskin Rooms, Drury Lane, Knutsford, United Kingdom where they was