mechanical engineer and Knight Bachelor (from 1948)

Sir Harry Ralph Ricardo (26 January 1885 – 18 May 1974) was an English engineer who was one of the foremost engine designers and researchers in the early years of the development of the internal combustion engine. Among his many other works, he improved the engines that were used in the first tanks, oversaw the research into the physics of internal combustion that led to the use of octane ratings, was instrumental in development of the sleeve valve engine design, and invented the Diesel "Comet" Swirl chamber that made high-speed diesel engines economically feasible. 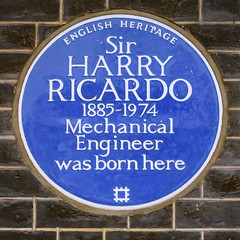 13 Bedford Square, London, United Kingdom where they was born (1885)