inventor of the telephone

Alexander Graham Bell (/ˈɡreɪ.əm/, born Alexander Bell; March 3, 1847 – August 2, 1922) was a Scottish-born inventor, scientist, and engineer who is credited with patenting the first practical telephone. He also co-founded the American Telephone and Telegraph Company (AT&T) in 1885. Bell's father, grandfather, and brother had all been associated with work on elocution and speech and both his mother and wife were deaf; profoundly influencing Bell's life's work. His research on hearing and speech further led him to experiment with hearing devices which eventually culminated in Bell being awarded the first U.S. patent for the telephone, on March 7, 1876. Bell considered his invention an intrusion on his real work as a scientist and refused to have a telephone in his study. Many other inventions marked Bell's later life, including groundbreaking work in optical telecommunications, hydrofoils, and aeronautics. Although Bell was not one of the 33 founders of the National Geographic Society, he had a strong influence on the magazine while serving as the second president from January 7, 1898, until 1903. Beyond his work in engineering, Bell had a deep interest in the emerging science of heredity. 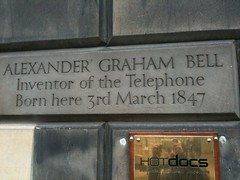 From the top floor of this building was sent on June 3, 1880 over a beam of light to 13...
Washington, DC, United States

14 South Charlotte Street, Edinburgh, United Kingdom where they was born (1847)

From the top floor of this building was sent on June 3, 1880 over a beam of light to 1325 L Street the first wireless telephone message in the history of the world. The apparatus used in sending the message was the photophone invented by Alexander Graham Bell, inventor of the telephone This plaque was placed here by Alexander Graham Bell chapter Telephone Pioneers of America March 3, 1947, the centennial of Dr. Bell's birth

13th Street NW, Washington, DC, United States where they invented the photophone which sent the first wireless telephone message in the history of the world from here (1880)