The Queen's Theatre in London was established in 1867 as a theatre on the site of St Martin's Hall, a large concert room that had opened in 1850. It stood on the corner of Long Acre (formerly Charles Street) and Endell Street, with entrances in Wilson Street and Long Acre. The site is within the modern Camden, part of Covent Garden. St Martin's Hall contained a 3,000-seat main hall and a 500-seat lecture hall. It was used for musical recitals, lectures and political meetings. The Queen's Theatre, one of the largest in London, had a capacity of 4,000 seats. The theatre closed after barely more than a decade, in 1878. The name Queen's Theatre has been used for other theatres in central London, including the Queen's Theatre, Dorset Garden (from 1685 to 1705), Her Majesty's Theatre (from 1705 to 1714), Scala Theatre (during the period 1831–1865) and the modern Queen's Theatre in Shaftesbury Avenue (since 1907). 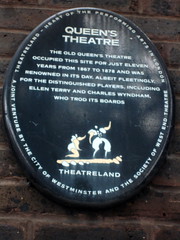 Queen's Theatre The old Queen's Theatre occupied this site for just eleven years from 1867 to 1878 and was renowned in its day, albeit fleetingly, for the distinguished players, including Ellen Terry and Charles Wyndham, who trod its boards