Henry Cavendish FRS (/ˈkævəndɪʃ/; 10 October 1731 – 24 February 1810) was an English natural philosopher and scientist who was an important experimental and theoretical chemist and physicist. He is noted for his discovery of hydrogen, which he termed "inflammable air". He described the density of inflammable air, which formed water on combustion, in a 1766 paper, On Factitious Airs. Antoine Lavoisier later reproduced Cavendish's experiment and gave the element its name. A shy man, Cavendish was distinguished for great accuracy and precision in his researches into the composition of atmospheric air, the properties of different gases, the synthesis of water, the law governing electrical attraction and repulsion, a mechanical theory of heat, and calculations of the density (and hence the mass) of the Earth. His experiment to measure the density of the Earth (which, in turn, allows the gravitational constant to be calculated) has come to be known as the Cavendish experiment. 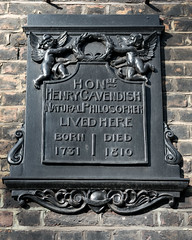