Shakespearian actor and 'The African Roscius'

Ira Frederick Aldridge (July 24, 1807 – August 7, 1867) was an American and later British stage actor and playwright who made his career after 1824 largely on the London stage and in Europe, especially in Shakespearean roles. Born in New York City, Aldridge is the only actor of African-American descent among the 33 actors of the English stage honored with bronze plaques at the Shakespeare Memorial Theatre at Stratford-upon-Avon. He was especially popular in Prussia and Russia, where he received top honors from heads of state. He was married twice, once to an Englishwoman, once to a Swedish woman, and had a family in England. Two of his daughters became professional opera singers. 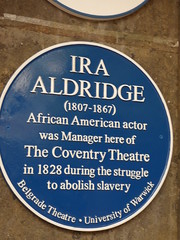 Former BHS - Upper Precinct, Coventry, United Kingdom where they was Manager here of The Coventry Theatre (1828)