Robin Hood is a legendary heroic outlaw originally depicted in English folklore and subsequently featured in literature and film. According to legend, he was a highly skilled archer and swordsman. In some versions of the legend, he is depicted as being of noble birth, and in modern retellings he is sometimes depicted as having fought in the Crusades before returning to England to find his lands taken by the Sheriff. In the oldest known versions he is instead a member of the yeoman class. Traditionally depicted dressed in Lincoln green, he is said to have robbed from the rich and given to the poor. Through retellings, additions, and variations, a body of familiar characters associated with Robin Hood has been created. These include his lover, Maid Marian, his band of outlaws, the Merry Men, and his chief opponent, the Sheriff of Nottingham. The Sheriff is often depicted as assisting Prince John in usurping the rightful but absent King Richard, to whom Robin Hood remains loyal. His partisanship of the common people and his hostility to the Sheriff of Nottingham are early recorded features of the legend, but his interest in the rightfulness of the king is not, and neither is his setting in the reign of Richard I. He became a popular folk figure in the Late Middle Ages. The earliest known ballads featuring him are from the 15th century. There have been numerous variations and adaptations of the story over the subsequent years, and the story continues to be widely represented in literature, film, and television. Robin Hood is considered one of the best-known tales of English folklore. In popular culture, the term "Robin Hood" is often used to describe a heroic outlaw or rebel against tyranny. The historicity of Robin Hood has been debated for centuries. There are numerous references to historical figures with similar names that have been proposed as possible evidence of his existence, some dating back to the late 13th century. At least eight plausible origins to the story have been mooted by historians and folklorists, including suggestions that "Robin Hood" was a stock alias used by or in reference to bandits. 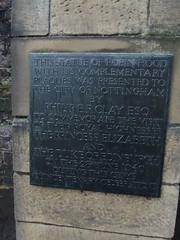 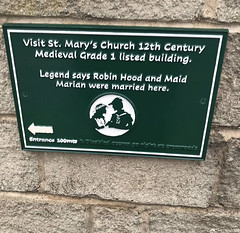 Robin Hood - Wentbridge. One of the only place names that can be located in 'A Lytell Geste of Robyn Hode' (c.1492-1534) is the Sayles now known as Brockadale, Wentbridge. 'And walke up to Saylis, And so to Watlinge Stret (e), And wayte after some unkuth gest, Up chance ye may them mete'.

the bridge, Wentbridge, United Kingdom where they visited

Swinecote Road, Edwinstowe, United Kingdom where they was