Jerome Klapka Jerome (2 May 1859 – 14 June 1927) was an English writer and humourist, best known for the comic travelogue Three Men in a Boat (1889). Other works include the essay collections Idle Thoughts of an Idle Fellow (1886) and Second Thoughts of an Idle Fellow; Three Men on the Bummel, a sequel to Three Men in a Boat; and several other novels. Jerome was born in Walsall, England, and, whilst he was able to attend grammar school, his family suffered from poverty at times, as did he as a young man trying to earn a living in various occupations. In his twenties he was able to publish some work, and success followed. He married in 1888, and the honeymoon was spent on a boat on the Thames; he published Three Men in a Boat soon afterwards. He continued to write fiction, non-fiction and plays over the next few decades, though never with the same level of success. He died in 1927 and his body was cremated. 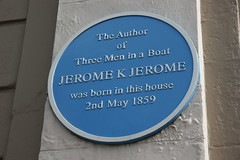 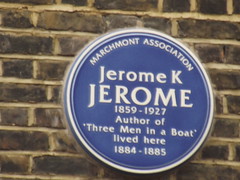 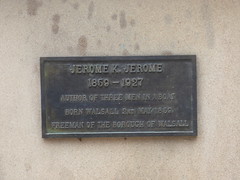 The author of Three Men in a Boat Jerome K. Jerome was born in this house 2nd May 1859

Near the Lodge, Walsall Arboretum, Walsall, United Kingdom where they was