photographer and pioneer of motion photography

Eadweard Muybridge (/ˌɛdwərd ˈmaɪbrɪdʒ/; 9 April 1830 – 8 May 1904, born Edward James Muggeridge) was an English photographer important for his pioneering work in photographic studies of motion, and early work in motion-picture projection. He adopted the first name Eadweard as the original Anglo-Saxon form of Edward, and the surname Muybridge, believing it to be similarly archaic. Born in Kingston upon Thames in the United Kingdom, at age 20 he emigrated to America as a bookseller, first to New York, and then to San Francisco. Planning a return trip to Europe in 1860, he suffered serious head injuries in a stagecoach crash in Texas. He spent the next few years recuperating in Kingston upon Thames, where he took up professional photography, learning the wet-plate collodion process, and secured at least two British patents for his inventions. He went back to San Francisco in 1867. In 1868 he exhibited large photographs of Yosemite Valley, which made him world-famous. In 1874 Muybridge shot and killed Major Harry Larkyns, his wife's lover, but was acquitted in a jury trial on the grounds of justifiable homicide. In 1875 he travelled for more than a year in Central America on a photographic expedition. Today, Muybridge is known for his pioneering work on animal locomotion in 1877 and 1878, which used multiple cameras to capture motion in stop-motion photographs, and his zoopraxiscope, a device for projecting motion pictures that pre-dated the flexible perforated film strip used in cinematography. In the 1880s, he entered a very productive period at the University of Pennsylvania in Philadelphia, producing over 100,000 images of animals and humans in motion, capturing what the human eye could not distinguish as separate movements. During his later years, Muybridge gave many public lectures and demonstrations of his photography and early motion picture sequences, returning frequently to England and Europe to publicise his work. He also edited and published compilations of his work, which greatly influenced visual artists and the developing fields of scientific and industrial photography. He returned to his native England permanently in 1894. In 1904, Kingston Museum was opened in his hometown and continues to house a collection of his works to this day in a dedicated 'Muybridge Exhibition'. 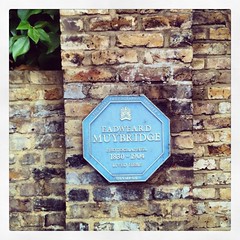 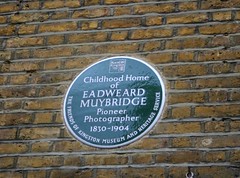 Development of motion pictures. In commemoration of the motion picture research conducted in 1878 and 1879 by Eadweard Muybridge at the Palo Alto Stock Farm, now the site of Stanford University, this extensive photographic experiment portraying the attitudes of animals in motion was conceived by and executed under the direction of Leland Stanford. Consecutive instantaneous exposures were provided for by a battery of 24 cameras fitted with electro-shutters.