Thomas Earnshaw (4 February 1749 in Ashton-under-Lyne – 1 March 1829 in London) was an English watchmaker who following John Arnold's earlier work, further simplified the process of marine chronometer production, making them available to the general public. He is also known for his improvements to the transit clock at the Royal Greenwich Observatory in London and his invention of a chronometer escapement and a form of bimetallic compensation balance. In 1780, he devised a modification to the detached chronometer escapement, the detent being mounted on a spring instead of on pivots. This spring detent escapement was patented by Thomas Wright (for whom he worked) in 1783. Whilst initially the design was crude and unsuccessful, with modifications it later became the standard form in marine chronometers, following the invention of the detent escapement by Pierre Le Roy in 1748. John Arnold also invented a similar escapement in 1782. In 1805, Earnshaw and Arnold were granted awards by the Board of Longitude for their improvements to chronometers; Earnshaw received £2500 and John Arnold's son John Roger Arnold received £1672. The bimetallic compensation balance and the spring detent escapement in the forms designed by Earnshaw have been used essentially universally in marine chronometers since then, and for this reason Earnshaw is generally regarded as one of the pioneers of chronometer development. Although he was principally a watchmaker, he didn't shy away from building clocks. When asked by Nevil Maskelyne, he produced a clock for the Armagh Observatory. This clock incorporated Earnshaw's new design of escapement and had a number of novel features including an air-tight case (designed to reduce dust and draughts). It was highly praised by John Thomas Romney Robinson in the 19th century who at that time believed it to be the most accurate clock in the world. In 1794, its purchase price was £100 and Earnshaw charged £100 to travel with it to Armagh and set it up in the new Observatory. The Observatory also purchased Earnshaw's second clock which was operated at sidereal rate with Edward Troughton's Equatorial Telescope. 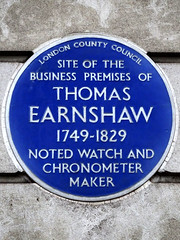